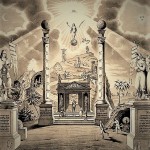 Such, my brethren, is the subject on which I have been requested to address you. Some who have the interests of Masonry at heart, have thought it was possible to say something upon this subject that might tend to remove erroneous impressions, to increase union and harmony among Masons, and to persuade society at large that its well-being and progress are, to some extent, involved in the advancement and prosperity of Masonry. They have demanded that I should say that something; and, though unaffectedly reluctant to do it, my obligation as a Mason bars against me all the avenues of escape, and compels disinclination to yield to the imperative mandate of duty.

It would need no argument to show that to the Masonic Order itself, as to any other order or association, however unpretending and unimportant, intestine dissentions, struggles for the possession of power, jealousies and heart-burnings must necessarily be harmful, retard its growth and progress, repel those who, if it were at peace with itself, would seek to approach its doors; and at first diminish and ultimately destroy its capacity for usefulness. If this were all that I desired to establish, I might say so much and at once conclude.

But we, my brethren, do not believe that this is all. We think that the highest interests of Society, and of the community in which we live, and, perhaps, even interests wider and more general still, those of the Nation, and of humanity at large, are affected and injured, in that which affects and does harm to Masonry. We think that the world without our Temples is deeply interested in the continuance or restoration of peace and harmony within; and that every Mason who encourages or by apathy permits dissentions within the walls that veil our mysteries from the world’s eyes, is an enemy, not of Masonry only, but of that world’s advancement and prosperity.

It is indeed true that the world at large, the statesmen and the men of business, are not in the habit of attaching much importance to the peaceful operations, the active efforts and silent influences of Masonry. Some even think evil of the order; to others its pretensions are the subject of mirth and food for ridicule; while probably the general impression is that it is a harmless and inoffensive association, rather laudable for its benevolent propensities, its charities, and the assistance its members mutually lend each other; but one in which the world at large is in no wise interested, one whose ceremonies are frivolous, its secrets mere pretense, its titles and dignities absurd, and its dissentions mere childish disputes for barren honors and an empty precedency, fit only to excite the pitying smiles of the grave and the sarcastic laughter of the ill-natured.

Nor is it to be denied, that there is warrant for this, in the unfortunate proclivity of over-zealous and injudicious brethren to make the history of Masonry remount to the time when Adam, in the Garden of Eden, was Grand Master; to invent fables and manufacture traditions; to invest with a mysterious sanctity the trite commonplaces that all the world is at liberty to know; to give interpretations of symbols that every scholar knows to be untrue and every man of sense knows to be vapid and trivial; in the vain parade of sounding titles and glittering decorations; and more than all, in the angry disputes which rend the bosom of the Order, accompanied with bitter words, harsh epithets and loud denunciations, that give the lie to the combatants’ claim of brotherhood, in regard to questions that to the world seem trifling and unreal.

Is society really interested in the peace and progress of Masonry? Has the world a moral right to demand that harmony shall govern in our Temples? Is that a matter which at all concerns the community? How grave and important are the interests that by our mad dissentions we recklessly put at hazard? And by what means are peace and harmony to be restored and maintained?

Such are the questions which it is demanded of me to consider. To do so, it is evidently necessary first to settle what Masonry is, and what its objects are, and by what means and appliances it proposes to effect those objects.

The well-being of any nation, like that of every individual, is threefold, — physical, moral and intellectual. Neither physically, morally, or intellectually is a people ever stationary. Always it either advances or retrogrades; and, as when one climbs a hill of ice, to advance requires continual effort and exertion, while to slide downward one needs but to halt.

The happiness and prosperity of a people consist in advancing on each of the three lines, physical, moral and intellectual, at once; for the day of its downfall draws nearer, even when its intellect is more developed and the works of its genius are more illustrious, and while its physical comforts increase, if its moral progress does not keep pace with its physical and intellectual; and yet without the last, the two first do not mark the loftiest condition of a great people.

That institution deserves the title of “public benefactor,” which by a system of judicious charities and mutual assistance diminishes the sum total of haggard want and destitution, and relieves the public of a portion of a burden which the necessities of the poor and shelterless impose upon it; for it thus aids the physical advancement of the people.

It still more deserves the title, if in addition, it imperatively requires of its members the strict and faithful performance of all those duties towards their fellow-men as individuals, which the loftiest and purest morality enjoins; and so is the potent auxiliary of the laws, and the enforcer of the moral precepts of the great Teacher who preached the Sermon on the Mount: for thus it labors for the moral elevation of the people.

And still more, if its initiates are also, and of necessity, devoted to the true interests of the people; if they are the soldiery of Liberty, Equality, and Brotherhood, and at the same time of good government, of good order, and of the laws, that made by the representatives of all, for the general good of all, must be implicitly obeyed by all: for thus again it aids in elevating still higher the moral character of the people.

And most of all, in addition to all this, it strives to elevate the people intellectually, by teaching those who enter its portals the profoundest truths of Philosophy, and the wisdom of the Sages of every age; a rational conception of the Deity; of the universe that He has made, and of the laws that govern it; a true estimate of Man himself, of his freedom to act, of his dignity and his destiny.

I mean to speak only of what Masonry teaches; and to set up no extravagant pretensions on its behalf. that its precepts are not fully obeyed by its initiates, in no wise detracts from their value or excellence; any more than the imperfect performance if its votaries detracts from the excellence of religion. The theory and the intentions of every man that lives are better and purer than his practice, – I do not say they are unfortunately so; for it is one of the great kindnesses of Providence, and a most conclusive proof of God’s existence and infinite benevolence, that the worst as well as the purest of men has ever which he must perforce always struggle to reach, an ideal and exemplar of a rarer excellence than he can ever attain to, strive and struggle as he may. It has been well and truly said, that even Hypocrisy is the involuntary homage which vice pays to virtue.

That Masons do not live up to the teachings of their Order proves only that they are men; that, like other men, they are weak with the frailties of feeble human nature; and that in the never-ceasing struggle with their passions and the mighty circumstances that environ us all, it is often their lot to be discomfited.  If the doctrines of Masonry are good, they of necessity have their effect, and are never taught in vain. For not in vain are the winged seeds of Truth ever sown; and if committed to the winds, God sees to it that they take root somewhere and grow.

A Lecture on the Evil Consequences of Schisms and Disputes for Power in Masonry, and of Jealousies and Dissensions Between Masonic Rites by Bro. Albert Pike