To what does the symbol allude? Doubtless there are many answers to this question. Depending on what country, what masonic group, or what Lodge you’ll get different answers. All are interesting, and some are actually a bit astonishing. It has been said to represent ideas such as God, Geometry, Generation, Gnosis, Great Architect, Gamma, Goodness, Gimel, Goat, and more.

When did the letter G first appear in Freemasonry? It is hard to say for sure. One theory is that the symbol could have been brought in by Rosicrucians and Qabalists who became Masons the last part of the 17th century.

Another theory is that it was introduced some time subsequent to 1717 by the members of the Grand Lodge of England. We are told in the early masonic lectures that G signifies “Geometry, the Root and Foundation of all Sciences.”

By the beginning of the nineteenth century, the letter G, was said to have a symbolic meaning of God as synonymous with Geometry. It was sometimes displayed in the center of the Lodge and other times hung in the East. The G represented both “God” as the supreme being and “Geometry” which is imagined as a means of seeing the perfect ordering of the universe.

Over time, it became identified with many other things. Why? That is exactly the topic of a debate that has been raging for centuries. The Masonic letter G is one of those aspects of masonic history that seems to follow an unpredictable path.

Masonic Scholar Albert G. Mackey goes so far as to say he feels Masonic symbolism has been hurt rather than helped by the adoption of the letter G. He writes:

“It is to be regretted that the letter G. as a symbol, was ever admitted into the Masonic system. The use of it as an initial would necessarily confine it to the English language and to modern times. It wants therefore, as a symbol, the necessary characteristics of both universality and antiquity.”

Is Mackey correct? Does the letter G lack universality? Has it hurt Freemasonry? How

should it be dealt with?

G is for Gimel

An interesting justification for the symbol’s importance can be found in a ground- breaking book by Brother Paul Foster Case called the Masonic Letter G. I read this work years ago when I was studying qabalah. Using the Hebrew Gematria as a tool, he defends the G symbol as not only universal but honorable. One of the arguments he gives is that the letter G corresponds to the third letter in the Hebrew alphabet or Gimel. He gives two ways this Hebrew G could be acknowledged as universal:

There is not enough space (or time) here to explain fully the argument which contains a load of Hebrew Gematria and interesting juggling with numbers but I recommend it if you like that sort of thing.

After his proof, Case remarks:

“Were nothing else to be said for it, it seems to us these facts would make the letter G a sufficiently universal, as well as sufficiently ancient, symbol of the Grand Architect.”

He explains in the various degree lessons of the craft that the idea of travel is significant.  By travel, the mason is able to trace nature through her various windings to her most

concealed recesses. Precisely the same thought is expressed in what many of the Masonic lectures tell us concerning God as He “Geometrizes.”

What does Geometry have to do with Freemasonry? How does God “Geometrize?”

God as the Geometrician

Geometry is taught to a Freemason, as he progresses in the science. As soon a one enters upon the world of geometry, symbolic and philosophical, the mind is opened to new influences that stimulate and refine it.

From the standpoint of science, geometry and its offshoots are vital sciences of measurement. Often, nature conforms to simple patterns with symmetry and structure. For example, the pentagon lies behind a five-petaled rose, or a dandelion is a sphere. Honeybees build their hives in hexagons.

Today, the study of fractals can explain some other seemingly chaotic systems in nature. That is why the craft as it relates to geometry is called a progressive science in the broadest sense. In the search for knowledge, there is much that we do not know and discoveries constantly being

Freemasonry is filled with practices that shift us to new perspectives. The contemplation of the vastness of time. The mysterious inevitability of death. The unlimited bounds of love. The power of symbols.

For example, a Divine symbol that is both universal and ancient is the Yod, the 10th letter of the Hebrew alphabet. It symbolizes that all created things are modifications of the one primal Spirit. It is the masonic “G”, at least according to some authorities. W.L. Wilmshurst writes:

There’s always more to learn. Another veil to lift.

Cosmology and all of the associated sciences have not been able to definitely know the source and ultimate purpose of life. This strongly suggests that there must be some hidden purpose in the geometry of creation that is beyond the present scope of human knowledge and comprehension.

In masonic lectures, we read:

“By contemplation of the Divine we may discover his power, wisdom, and goodness and view with amazing delight the beautiful proportions which connect and grace this vast machine.” 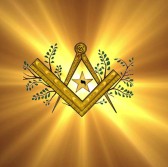 some manner mysteriously reflected in our human world, if we have eyes to see.

What, finally, is the message of the Masonic letter G?

Perhaps it is that each of us must ponder the Divine, to be a geometrician, working according to his ability. Beyond the obvious pleasure of contemplating the glorious works of nature – there is delight that comes when beholding the “true” Masonic letter G, whatever symbolic form it takes.

“When the Lodge is opened, the mind and heart of every Brother composing it should be deemed as also being opened to the “G” and all that it implies, to the intent that those implications may eventually become realized facts of experience. When the Lodge is closed, the memory of the “G” symbol and its implications should be the chief one to be retained and pondered over in the repository of the heart.”