While we make no bones about the esoteric nature of our beliefs and interests in Universal Co-Masonry, what may be missed by many is the connection which this esotericism, in general, has to a historical divide within perhaps all religions. While we may know the history of religion or at least the religious tradition(s) we’ve been closest to in our lives, do we know their esoteric history? Do they all have an esoteric history? What is the purpose of this split between the esoteric (inner) and exoteric (outer) teachings?

The word occult means hidden, and can be used interchangeably with esoteric, but what is it hiding from? Did this secretiveness arise simply to avoid the persecution of the church in the Middle Ages and Renaissance, as we’re often led to believe, or has concealment always been in its nature?

The Shamanic Thread in Religions

It would be absurd to attempt to tell any sort of true history of religion in the context of a single blog post, but I do want to highlight what is most relevant to the topic. In doing so, I think it’s useful to return to the beginning.

Where did religion begin? Archaeologically, we see the dim traces of the beginnings of religion as signified by cave paintings and burial sites, the point at which humans began honoring and burying our dead. In truth, we know very little about this twilight of belief.

The first instance of religion which we have more direct experience and knowledge of is that which occurs in tribes, which has come to be referred to by anthropologists as Shamanism. We see shamans in the indigenous tribes we encounter and study in modern times, and we assume that this system must have been present from our own beginnings and that these people serve as a glimpse into our past; for the moment, I’ll work with this assumption without question.

Shamanism involves a minority of the tribe, often only a single shaman and one or more apprentices, serving as the interface between the spiritual realms and the tribe. What makes the shaman unique is that he or she is able to communicate with the world beyond the senses in a way that most aren’t, whether through natural capacities, or the use of psychoactive plants. In the case of Shamanism, we can clearly see the beginnings of a “mystical minority” of the population, who are acknowledged and even vital to the tribe.

As we move forward through the progressive trajectory of civilization, we see the same pattern but with changes over time. As people developed kingdoms and larger civilizations, they also began to build separate structures within each city, and temples emerged as spaces uniquely devoted to interfacing with the divine. It’s interesting to note that, just as the various buildings physically cordoned off each “area” of life, with the government here, the market there, etc., so too did religion begin to be separated. It became less and less woven into the whole of life, as was more-so the case in the tribe, and became something you do “there” specifically.

Furthermore, we might even say that this, in fact, was the beginning of religion, inasmuch as religion describes a specific, separate domain of human activity; if this be the case, then we can recognize that the emergence of religion was a product of the divvying up of life into categories, and simultaneously, a continuation of the shamanic tradition. All of the above was also mostly relevant in cities, while the people living in villages still relied on shamanic figures for much of the time, until the priesthood of the city began to replace the shamans and druids with priests.

As far as we know, the esoteric side of religion also emerged during this time. Greece and Rome had their mystery schools, the Hindu kingdoms had their Brahmins and Yogis, Israel their prophets and later their Kabbalists, etc.

However, this mysticism wasn’t necessarily separated from the priesthood. In ancient Greece, for instance, it was expected or even required to undergo the initiations, in order to be a priest, or for that matter, any other prominent and influential member of society. Since these things weren’t always recorded, we may never fully know just how connected the various esoteric traditions and their correlating priesthoods were.

The Standard Deviation from the Mundane

A question that I find very interesting is: Why has this mystical minority seemingly always existed? Are they simply those which are smarter, less “neurotypical”, more prone to transition between different states of consciousness, or more likely to experiment with psychoactive drugs? Or could it be some combination of all these things?

It’s commonly understood that many things, including human traits like height, IQ, blood pressure, and salaries, occur in the form of a normal distribution, or bell curve. This just means that when you plot them on a graph, the majority are “normal” and so the middle of the graph is the largest, and the further from normal you get in either direction, the more it slopes off, like the edges of a bell, with fewer people being abnormal.

Could it be that whatever trait or collection of traits contributes to someone being open to, and capable of embracing the mystical side of life more completely is simply always a minority of people out at the edges of the bell? And what about the rest of the people, who live in the middle of that bell curve, who are normal? Why must they be separated?

Will That Be Milk, or Solids?

For most of us who find ourselves at the mystical end of the curve, life experience has taught us that those who dwell within the realm of normality are often not willing or able to understand many of the more profound concepts, for whatever reasons. It often seems that what they need is exactly what exoteric religion provides, simplified stories and concepts which can give meaning and purpose to their lives, but which the more mystically inclined would find lacking. Perhaps that is exactly why exoteric religion was created; at some point, the inheritors of the shamanic thread understood what Jesus expressed, when his disciples asked why he must speak in parables to the masses: because having ears, they cannot hear, and having eyes, they cannot see. 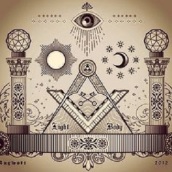 Of the many esoteric traditions, Freemasonry has served as an ideal refuge and vehicle for the mystically inclined. This is primarily because of its level of organization and practicality, which has facilitated its membership not just studying high concepts behind closed doors, but having a major influence on society at large, as well as a highly functional internal structure that allows us to be effective at getting things done. While the milk of parables is enough for most, for those who seek more solid food, we welcome sincere truth-seekers of every kind.

As always, this writing does not represent the official views of Universal Co-Masonry, but is simply the reflections of one Co-Mason.