Gender is in everything; everything has its Masculine and Feminine Principles; Gender manifests on all planes. ~ The Kybalion It seems that gender is a matter of some controversy, these days. Many people wish to do away with the idea of gender altogether, or… END_OF_DOCUMENT_TOKEN_TO_BE_REPLACED

The Mason’s Sword: Emblem of the Mind 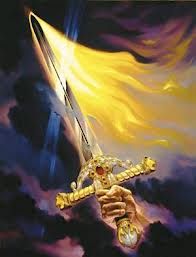 “Never give a sword to a man who can’t dance.” I’ve heard this proverb many times over the years. Nobody seems to know who wrote it or what it actually means. Most contrast the joy and beauty of dancing to the brutality and violence… END_OF_DOCUMENT_TOKEN_TO_BE_REPLACED