Who Is the Widow’s Son?

Posted on 5 Jun 2019 by jonathandinsmore 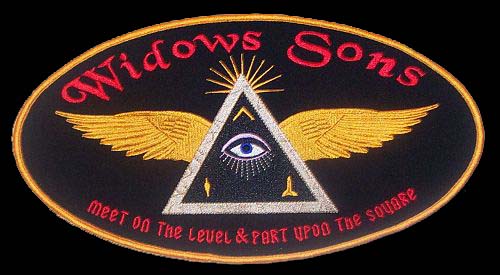 Perhaps most well known as a Masonic Biker organization, the origin of the term Widow’s Son is actually quite old and deep in Masonic Lore. What is the significance of this term, why is every Mason considered to be a Widow’s Son? As with so many other aspects of Freemasonry, the mystery of the Widow’s Son is part of a multi-layered living tapestry of myth which is both investigated, discovered, passed on, and reconstructed over time by each Mason individually, and all Masons collectively.

As always, this writing is not an expression of the official views of Universal Co-Masonry, but simply the reflections of one Co-Mason.

As even non-Masons may be aware, Freemasonry takes as its primary mythological framework various aspects of Biblical history, particularly King Solomon, and of course the central figure of the architect which he chose to build the Temple of God during his reign, Hiram Abiff. One line of investigation into the term Widow’s Sons speculates that the title refers to a literal genealogical lineage, a vine whose fruits include Jesus, Solomon, David, all the way back to Enoch, and Adam, the biblical first human. As you might imagine, Masonic Grail Bloodline theorists have a heyday with this interpretation.

The reason this lineage is referred to as Widow’s Son is that one of it’s early maternal ancestors is the biblical character of Ruth. She was a Moabite, a people descended from the incestuous episode with Lot and his daughters after Sodom and Gomorrah were destroyed. However, Moab was also a nephew of Abraham. Therefore, Ruth was a member of this somewhat “tainted” yet still royal branch of the Israelite family, and was particularly righteous because of her loyalty to her husband (from Judah), even after death. For this, she was eventually blessed by becoming husband of another Judean, Boaz, and eventually, Great Great Great… (30 generations’ worth) Grandma to Jesus.

Does being a Widow’s Son, in the sense of being a Mason, have some connection to biblical genealogy? Given that there’s no particular genealogical or genetic analysis when you become a Mason, this is doubtful, although we can’t say there’s not some way in which it might be relevant. I can’t even begin to touch any sort of thorough investigation of this topic within the span of this short article, but the above links and some related Googling can no-doubt lead you down a deep rabbit hole, if your heart so desires.

On the other hand, it’s probably more likely that the meaning is more symbolic, perhaps having to do with bringing Lost Children of God back into the fold, or in an internal sense, aspects of the self which have gone astray back into alignment with the internal divinity. As with just about anything, you can also interpret it in a Jungian fashion. In that vein, another line of reasoning says that the Widow’s Sons are actually the children of matter who are separated from the spiritual paternity of God the Father, with the Widow, in this case, being the feminine aspect of God, as manifested in the material world.

This would make the “Widow’s Sons” those who have lost their connection to their divine origin, God the Father, resulting in a clinging to Mother Nature, but seeking to find that paternal divine connection again. Interestingly enough, one etymological interpretation of Hiram Abiff means “the king that was lost.” Of course, this also has relevance to the Egyptian origins of the story, and the mythical deceased God-King.

One archetype you may have noticed about the various stories that have captured the popular imagination is that of the Orphan Hero. If you’ve never thought about it, take a moment to consider how many heroes and villains of fiction are orphans of one kind or another, a list which includes notables ranging from some the most popular superheroes like Superman, Batman, or Spiderman, to various fantasy protagonists like Frodo Baggins or Harry Potter himself. What is it about the Orphan Hero that speaks so strongly to the collective mind?

It’s a well-known psychological fact that fatherless children are at greater risk of a variety of mental health issues, and general life problems, and this may be why many villains are also orphans. However, as we see played out in our fictional orphan heroes ad infinitum, that risk may actually represent merely one half of a potential to go farther in either direction than an otherwise normal person would, simply by virtue of facing the harsh truths of life so early on. Perhaps there is a reason that Freemasonry is known for caring for widows and orphans, and taking the literal widows’ sons under their wing in traditional male Freemasonry. Certainly widows and their sons are some of those most in need, but perhaps are also known to possess some unique potential, due to the psychological consequences of their situation?

It doesn’t require much imagination to see how such an event as the early loss of one or more parents might jump-start the consideration of the larger questions in life, a dark night of the soul long before most people ever have to confront such things, at the very least. An analysis of the orphan archetype reveals that it contains both perils and potential. However, given that actual orphans are relatively few and far between, compared to the vast majority of relatively normal family situations, why does the orphan hero play such a prominent role in popular mythology?

Diamond in the Rough Ashlar?

Indeed, if we look carefully at the orphan hero archetype, the personality traits the characters  exhibit are often those of the type of person drawn to Masonry. Think about the common orphan heroes: Harry Potter, Peter Parker, the young Clark Kent, Bruce Wayne, or even Cinderella. Their dire situations in life set them apart from the herd, and make them more reflective, serious, and possessing some extra quality, which may be fictionally manifested as intelligence or some kind of magic, edge, or latent superpower; however, they are also often lacking in certain key skills like confidence, decision-making, discipline, and leadership, things ideally learned from a father. The hero’s journey they undergo is typically about learning these aspects by facing their fears and embarking on a quest of facing the darkness of life, at first with some assistance from wise helpers, but ultimately on their own.

Why this “something extra?” In the realm of personality, what you do is what you become. If an early major crisis prevents you from easily relating with your peers, and also compels you to seek greater meaning in life, then much of the energy that would normally be spent on “normal” socially-driven activities will be spent on something else, and what often manifests from this is an increase in other skill-sets mostly unrelated to social activity, such as creativity, rationality, philosophy, and insight. By virtue of being somewhat detached from the primate dynamics of normal human social hierarchies, such people are more likely to develop things like wisdom and intellect early-on.

The Widow’s Son is ultimately something we all find relatable and significant, whether or not destiny has literally foisted an early dark night of the soul upon us.

On a more symbolic level, from Horus to Luke Skywalker, we can all see a bit of ourselves in the many iterations of the Orphan Hero, perhaps because of the symbolic disconnect from the mundane world, and sense of some higher purpose to be discovered. The challenge which is faced by us all is to learn the inner tools necessary to manifest the potential within us, and that is exactly what Freemasonry is designed to do. The end result, when properly executed, is leaders or “Kings” in society who are not simply common, beastly people playing the dominance hierarchy games of human society purely to fulfill their own base desires, but thoughtful and wise leaders, who may have otherwise never risen to the occasion, had they not undergone the learning, healing, and strengthening necessary to play the role.

← The Masonic Noah’s Ark: Navigating a Great Deluge
Behind the Widow’s Son: A Deeper Dive into the Enigmatic Mythology →