Posted on 12 May 2019 by jonathandinsmore 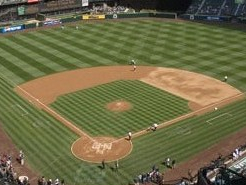 It’s difficult to deny America’s status as a state profoundly influenced by esotericism, and specifically Masonry, from it’s very inception. From the number of influential Masons in American history, to the Masonic design of Washington D.C. and many other capital monuments of individual states, and the blatant esoteric symbolism on the American dollar itself – not believing it is simply being either ignorant of the extent of the evidence, or in denial.

So, what else that is quintessentially American has mostly unseen esoteric, and perhaps Masonic significance? In recent articles I’ve discussed Masonic ties to jazz, said to be the only purely American genre of music, and today I’ll present the case that none other than the Great American Pastime, the sport of baseball, may have been influenced by Theosophists and Freemasons in it’s early history, and might carry esoteric symbolism throughout its structure and rules.

As always, this writing does not reflect the official views of Universal Co-Masonry, but is simply the reflections of one Co-Mason.

The Diamond and the Checkered Green

From the beginning, this all might sound a bit like frantic conspiracy theorizing, even if it’s not particularly conspiratorial per se, if we didn’t first acknowledge the well-known fact that one of the central figures of early baseball coming into its modern form, Abner Doubleday, was a Theosophist, and another important figure in it’s early days was a Freemason by the name of Alexander Cartwright. Whether Abner or Alexander were truly the sole or primary progenitors of the game is heavily debated, but even if it arose as more of a gradual evolution from its recreational ancestor Rounders, the many esoteric symbols and numbers are difficult to explain away.

For starters, there’s the diamond shape of the baseball field itself. While most major sports are played in bipolar rectangles (think soccer, football, hockey, basketball, etc.), baseball is the only one to take place on a diamond, which strongly resembles a square and compass, especially when viewed from the perspective of behind second base, which would make home plate the circular apex of the compass. Whether inverted or not, there’s clearly a resemblance, and the fact that the square end is in dirt may also be related to the earthly qualities said to be represented by right angles.

To take it even further, many baseball fields have recently begun to be mowed in a checkerboard fashion, perhaps unwittingly adding to the Masonic overtones.

All Freemasons will also begin to recognize some similarities of the shape of the field, placement of the bases, and journey of the batter to elements of a Lodge, which I won’t allude to here very concretely. Many may also be surprised and interested to find that the journey of the batter around the bases, in the historical origins of the game, was in reverse of the direction it runs now. The shape of home plate, where the player both begins and ends, may strike a cord.

A Game of Threes

Three is a number with mystical significance to many esoteric teachings, and Freemasonry is no exception. The 3° being the pivotal point at which a Mason becomes a Master Mason, and the 33° being the penultimate achievement of Masonry, and many other instances of 3 in Masonic Life and Lodge are themselves, of course, symbolic allusions to the deeper significance of the number three. As it so happens, baseball is a game entirely based on 3, and multiples thereof.

The scoring of baseball occurs in threes: 3 strikes, 3 outs, 9 innings, 9 positions, 27 total outs, and 81 each of either at home games or away games. Of course, 3 and 9 have quite interesting mathematical properties in and of themselves, which is partly why they are considered sacred by so many traditions. Nine times any other number equals something which is numerologically nine, and also which divides the ten fingers into it’s product, to name just a couple of it’s “mathemagical” properties.

Take Me Out to the Soul Game

Some have also read even further symbolic significance into the nature of how baseball is played, as a metaphor for the soul’s gnostic journey. By such an account, the pitcher is seen as the demiurge throwing obstacles at the batter, who is the individual soul, who must use exact timing and precision to attempt to hit the ball out of the park, representing the soul leaving the limited world of physicality, and allowing the individual to run through the bases without obstruction, as well as allowing any others on the path to pass through as well, representing what happens when a soul becomes illumined, and is able to illumine others. On the other hand, if they “strike out” by not being successful at least 1/3 of the time, then they must go back into the ancestral realm until they’re “called up to bat” at another incarnation.

Did baseball’s founders intend this extent of esoteric meaning? It’s difficult to say, perhaps we could expect something like that from Abner Doubleday, as a Theosophist, or Alexander Cartwright, a Freemason; but again, the claim of who originated the modern version of the game is hotly contested. If I’m being honest, aspects of it seem to me like a bit of a reach. It’s possible that the way baseball is played actually is a much more mundane metaphor of meeting life’s challenges. Perhaps it’s both.

Ultimately, it’s up to each individual to decide what they think about all that, but it’s nevertheless interesting Masonic food for thought.