I have a sense that every person on this planet is being tested at this time. This impression came to me recently while watching the tragic burning of the Notre Dame Cathedral in Paris. The fire blazing impacted the world greatly. How could this happen? The faces of the French people singing the Ave Marie, some while kneeling and weeping, was unforgettable. I knew in my heart that they were not just responding to a building on fire. There was something deeper going on. But, what?

One of the most impactful images was the flames bursting forth in front of the twin pillars on the cathedral, which both survived. The spire and roof, however, burned down. As a Freemason, I have learned the symbolic importance of the two pillars featured prominently at the entrance of Masonic Temples. Since the beginning of time, sacred and mysterious places have been guarded by two such pillars acting as guardians at the gateway into unknown realms.

It seems to me that the burning of Notre Dame was an extreme situation. But throughout history, we could name many more such situations. Freemasons are familiar with the lessons associated with tales of destruction, especially of King Solomon’s Temple.

Do these tragic events point to dramatic changes in human consciousness? Are we being challenged to look deeply into each and every situation on the earth to see what is really taking place? Are we being tested? Does an examination of the two masonic pillars give any insight?

Historicity in the Bible

In Freemasonry, the pillars of the Temple are called B. and J. The left- hand pillar, or north pillar is named Boaz (B.) which means “In Him is Strength.” The right- hand pillar, or south pillar is named Jakin (J.) which means “He Establishes.” The two pillars were among the many notable features of Solomon’s Temple. I found a study of the physical characteristics to be very interesting. The bible deals with the subject in several different passages.

In regards to the material that they were made of, 1 Kings implies the pillars were solid brass but in another interpretation in Jeremiah 52, they were said to be hollow. They were probably made in parts, cast in clay molds. The masonic lecture says the following:

“These pillars cast hollow the better to serve as a safe deposit for the archives of Masonry against all conflagrations and inundations.”

The pillars were built to be enormous – almost 30 feet tall and 6 feet thick! While the Biblical account does not provide a clear picture of what the capitals (chapiters) looked like, it does indicate they were highly ornate with leaves of lily work, network, and chains of pomegranate. 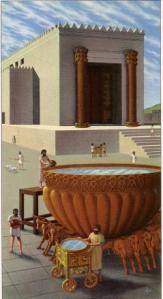 Why were the pillars put there to begin with? It is tempting to presume that their purpose was to hold up the roof of the portico. However, in view of today’s design precedents, they were probably merely ornamental, to give a dynamic entrance to the plaza.

What about the orientation of the pillars? From which direction did one see J. on the right and B. on the left? From the outside looking in or from the inside looking out? The most accepted and masonic theory placed the right pillar, J., in the south, and the left pillar, B., in the north. Perhaps the placement had a ceremonial purpose, the king receiving an official position next to J. and the High Priest next to B.

When the First Temple was destroyed, the pillars did not survive. They were not replaced with the building of the Second Temple. Many viewed this as a travesty as the operative building Masons in those days went to great lengths to memorialize pillars into architecture for posterity.

The Temple is said to be destroyed twice, captured and recaptured 44 times, besieged 23 times and attacked 52 times. The edifice was re-built twice. Since its destruction, no researcher has been able to solve the innumerable contradictions from the various biblical texts. This leads a person to look beyond the physical appearance to a more symbolic significance.

What, then, do the pillars represent, speculatively?

Eternal in the Heavens

The most common theory among Freemasons is that the pillars B. and J. represent what is known in Eastern philosophy as the pairs of opposites. A Freemason is taught to balance the opposing forces of his own nature by aligning his or her own thoughts, feelings, and actions with the grand plan. He learns through allegory that physical death is only of the body, the form nature, which according to the masonic philosophy will be reborn again in another form. Each individual mason is said to be the symbol of a spiritual temple – “a temple not made with hands, eternal in the heavens.”

Brother W.L. Wilmshurst refers to the opposites of “good and evil; light and darkness; active and passive; positive and negative; yes and no; outside and inside; man and woman” and so on.

Brother C.W. Leadbeater claims that the two pillars correlate to dharma and karma. He says that “In the harmonious working of these two laws a man may attain the stability and strength required to reach the circle within which a Master Mason cannot err.”

Life and Death are also represented as pairs of opposites in the pillar symbolism. Sometimes the death of the form nature is necessary to remove that which is old and hindering. This is later followed by the clear shining forth of the birth of constructive forces of new ideas and principles.

Why do we find destruction frightening, then? it is my opinion, our response against destruction can be our greatest error. Some creations by mankind need to be destroyed. If we resist the destroying angels, we miss the opportunities of healthy cycles of growth.

Builders long ago never questioned that they lived and worked under the ever-present watchful eye of the Great Architect of the Universe. Today many people dismiss that way of thinking, as rubbish perhaps.

In the simplest of terms, my sense is that human labor alone did not build and re-build the Temple of Solomon. It will not re-build the Notre Dame cathedral. Faith and reverence for the Divine are the lasting ingredients carved into any edifice. We are being tested in these difficult times on our worthiness as builders.  In balancing the two pillars of our own nature, we are guarding every moral and social virtue.

“The Two Great Pillars which stand at the entrance, invite the Initiate into its mysteries; so noble in proportion, so intricate in design, so beautiful to see. They seem to keep solemn watch above the scheme, as if to throw a hush of awe about the soul that would mount to the Upper Room of the Spirit.” ~ Brother H.L. Haywood