Am I my Brother’s Keeper? – A Masonic Interpretation

In Freemasonry, the term “brother” is used to demonstrate a closeness of relationship that is not necessarily based on blood ties. It is formed from a common bond, shared obligations and experiences. In addition, being a child of the Divine Father (or Great Architect) accounts for a sacred cemented kinship with each other.

Lately, the question, “am I my brother’s keeper?” has been echoing in my mind in terms of my own masonic obligations.  This question goes to the foundation of what it means to be of service in the Great Work. The ultimate aim in masonic teachings is the mastery of self, through reflection, actions and acceptance of the sublime lessons of immortality. The student is encouraged to temper their emotions and control their vices and practice the tenets of brotherly love, relief and truth.

This line of thinking led me to revisit the story of Cain and Abel, and the actual source of the “brother’s keeper” phrase. As in any holy book like the bible, there is fair debate whether passages should be treated literally or as a malleable allegory. The seeming contradictions are common for writings that span over centuries. Each individual’s faith, academic viewpoint, view of religion, or personal worldview certainly comes into play in interpreting the text. I was hoping to find some masonic insight in this age- old bible story.

Basically, the passages from Genesis 4:1-16 can be summarized like this:

Cain was the first son of Adam and Eve and Abel was the second son. Cain was a farmer and Abel was a shepherd. When it came time to bring an offering to the Lord, Cain offered fruit and Abel offered a slain lamb. The Lord was satisfied with Abel’s offering, but unsatisfied in Cain’s. Cain, filled with jealousy, killed his brother.

After the murder, we read in Genesis 4:9:

The Lord said to Cain, “Where is Abel your brother?” He said, “I do not know. Am I my brother’s keeper?”

Things did not go well for Cain.

Translated from the original Hebrew, the word “keeper” refers to someone who “watches over,” or “guards.”

What is the symbolic meaning of these two characters? Could they relate to the quest of a Freemason?

Cain and Abel – From Darkness to Light

Some theories say that Cain and Abel were twins and each twin could represent our higher and lower natures. This speaks to the heart of the masonic work which is learning to navigate the duality of our existence. For example, there would be no light without darkness, no good without evil, no love without hate and so on.

Comparing light vs. darkness is an important study. However, what’s curious about the subject of light is that everyone knows what it is until you ask them. In the Bible we read that “God is light.” This quotation evokes a mystery. It suggests there is a deeper connection to the subject of light than meets the eye. It seems unlikely that when you go into a room and flip a switch, you are turning on God. Equally mysterious is the concept of darkness.

Recently, in a Lodge meeting we studied Brother Leonard Bosman’s work, “The Light of a Master Mason.” Bosman proposes that the myth of Cain and Abel is about the Freemason’s battle between two opposite aspects of mind. The grand struggle deals with the incompatibility of these two natures, especially when the ego is in control.

From “Light of a Master Mason” we read:

“Abel is the Love-Mind, Cain the Head or brain mind; Abel is the heart or spirit, Cain the earthly mentality. Hence it is that, symbolically as well as in actuality, Cain kills his brother Abel, that is to say, the hard Cain-like mind kills the pure love nature (Abel) when preventing it functioning.”

Bosman makes a good point that Abel is not the one struggling. The struggle is about Cain because the ego is always in a constant struggle to kill off the higher nature. The ego wants total control because to sacrifice the ego is to die to self and let the Light nature live through you. No easy task.

Both aspects of the mind have a function. Cain, according to the inner meaning of its etymology represents the hard, pointed weapon of the mind. Cain is the selfish, acquisitive mind, the “getter,” the “centralizer,” whilst Abel is the yielding one, the “giver.”

If this is all true, then how do we “master” these two aspects of our nature?

Tubal Cain – The Sharpener of Mentality 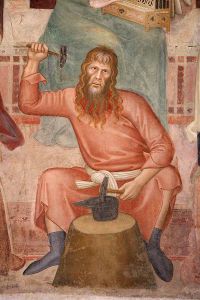 The symbolic key may lie in Tubal-Cain, a blacksmith character in the bible who was the son of Lamech, a descendant of Cain. He was known as an artificer in metals of brass and iron. In the legend, there is a biological connection as well as a symbolic one. Bosman writes that Freemasonry may be “thought of as an alchemical experiment, the Lodge in this sense being the Great Alchemist’s cauldron in which the base metal of the lower nature will be changed into the gold of the spiritual.”

Further on, in “Light of a Master Mason” we read:

“In all this the student of Freemasonry will see the inner and secret meaning of Tubal-Cain, the yielding of the central might or egoistic mind, the letting-go, as it were, of the personal self as it spreads out to become a greater self, the ONE that is in all.”

In other words, the more we cling to self-importance and ego, the more we are undoubtedly living in darkness.

The mystical worker will often cry, “When I’m nothing, I’m everything!” This might possibly be why so few people truly seek an authentic path to enlightenment. Who wants to be nothing? We’ve all been told the whole purpose is to be somebody.

We could draw two conclusions from all this. We could decide that the Cain and Abel legend is simply a good story — an illusory tale to tell our children. Or we can assume that it does have some merit in its symbolic import. I prefer the second option myself, if only because it jibes with my own intuition as a masonic worker that we can learn about ourselves from symbols.

Am I my Brother’s Keeper? Indeed, I try. “To make daily progress in masonic light” sounds simple, but it’s probably the hardest concept a Freemason has to learn. That’s OK, because it also offers a lifetime of value.

“What the sad world needs – what each of us needs – is more light, more love, more clarity of mind and more charity of heart; and this in copious measure is what Free Masonry gives us – if only we let the light of love enter the dark recesses of our hearts.”   — Bro. Jyothindra Kumar

2 Comments on “Am I my Brother’s Keeper? – A Masonic Interpretation”