I grew up listening to the Beatles. John Lennon was one of my favorite musicians. Recently I was listening to his song “Imagine.” As music sometimes does, it triggered a whole chain reaction of questions.

What does it mean to imagine, really? How is imagination related to creativity? Does it guide the Freemason? Is there a masonic message underneath the song’s lyrics for those who have the “seeing eye”?

At first listen, it’s easy to think of the song “Imagine” as a simple tune: a ballad, a vision of peace, a piano-driven melody. But at second listen,  I began to wonder, deep down, if what Lennon describes will really happen. Will the world have a happy ending?  To imagine all people living in peace asks for the giving up of what we often cling to most frantically.

Even so, I subscribe to the theory that we are poised for a great leap forward in our evolution as humans. This turning point in our history is propelled by technology which is fundamentally transforming not only how we live as a species, but also how we see ourselves at our core. 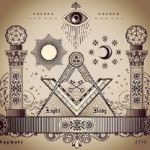 And, in order to journey into this uncharted new phase of human history, we need Freemasonry more than ever. Why? Because behind all the Masonic work and underlying all its rituals and symbolism there can be found the prophetic vision of a new world. It frames a code and system of moral imagination for those who know that their work and actions transform themselves, and their world.

“The prophet of old has told us that ‘where there is no vision the people perish.’ In Masonry the vision blazes forth in the East, and towards the materializing of that vision all good Masons work.”

This begs the question: how do all “good masons” work at imagining?

Imagination: From “Ideas” to “Ideals” to “Idols”

The scholar Wendy Wright describes the imagination as:

“the crucial capacity of the human person to create a world – either the familiar world of the everyday or a world not yet visible. Our relentless human search for new ways of being and relating, our dreams of beauty, our longings for mercy and justice.”

Wright claims that imagination is the heart of all creative work, allowing us to imagine the unseen and give form to the new. It is essential to all human activity. It gives us the power to recall the past, and to predict possibilities for the future.

Today, the job of remembering the past has been well documented by research scholars. In our schools and in our lodges, we study the traditional history as it has unfolded down the centuries. But do we spend as much time attempting to imagine a clear picture of the future? Is there a method whereby ideas can be developed?

In the writings of Brother Alice Bailey, she gives an outline broadly speaking of how ideas pass through three stages.

Bailey says that “once an idea becomes an ideal, humanity can freely reject or accept it, but ideas come from a higher source and are imposed upon the racial mind, whether men want them or not.”

Interesting to consider? Not sure I agree with all of that sentence, especially the word “imposed,” but let us see how this method might work.

Imagine: “A Brotherhood of Man”

Take for example the idea of “brotherhood.” Most would say that in its pure state, the idea itself is from a higher source (Divine). In Early America, the impressed idea took flight as a radical thought movement in surprising ways. Brother George Washington and other early American Freemasons abandoned a European past in which an overbearing authority controlled the flow of ideas. A sense of something new was being imagined and being born in America.

The early masons “worked” to actualize this masonic ideal. They imagined a liberty from the imprisoning conditions of an oppressive class-ridden society. They imagined equality of society based upon universal education and combating ignorance. They imagined a fraternity, where all men are brothers.

Liberty! Equality! Fraternity! These three words were the outcry and ideals of the best minds of the time.

As such, through the imaginative process, the founders of America began to materialize a sensed idea of brotherhood, even if still a rough stone.

“He who would become an accomplished Mason must not be content merely to hear, or even to understand, the lectures; he must, aided by them, and they having, as it were, marked out the way for him, study, interpret, and develop these symbols for himself.”

Pike stresses that the lectures and teachings must mark out a way. To develop the symbols is to “mark well,” making them manifest in the everyday world.

A case in point is The Great Seal, which was designed under the direction of accomplished masons such as Thomas Jefferson and Benjamin Franklin. The Latin motto that is displayed on the unfinished pyramid — Annuit Coeptis Novus Ordo Seclorum — can be approximately, if poetically, translated as: “God Smiles on Our New Order of the Ages.” It expresses Masonic philosophy at its heart.

Thus, in the founding of America we see the three stages of the imagination process that Brother Alice Bailey describes.

And today? What do Freemasons imagine? Perhaps a better question is: How do Freemasons imagine? Sure, the world is not a Utopia yet.  But I have come to realize that the process of imagination can be a path to discovering what is good, true, and beautiful.  And in the words of John Lennon, “it’s easy if you try.”

“The heart of human identity is the capacity and desire for birthing. To be is to become creative and bring forth the beautiful.” — John O’Donohue