Freemasonry and Geometry: What are the Symbolic Meanings of the Most Basic Geometric Forms?

Posted on 30 Sep 2018 by jonathandinsmore

The more abstract a concept is, the more meaning that we can find in it. Is this because the meaning is all projected from within our minds, or because there is something objectively real there to be found? Plato or Pythagoras certainly believed the latter, as did Jung with his archetypes, and certainly the abstraction of mathematics has enabled much of our modern scientific grasp of the workings of the world around us.

In Freemasonry, we deal in symbols constantly. The Temple itself is a symbol, as are all the rituals which take place within, and there are layers of meaning which are only revealed as one progresses through the degrees. Geometry, in particular, is very significant to Freemasonry. This stems not only from the practical geometrical knowledge that was required to build grand cathedrals and other structures by operative masonry, but also from the Western wisdom teachings stemming from Pythagoras, Plato, and others, often referred to as Sacred Geometry, which sees a greater symbolic significance in geometrical forms.

While its common to find interpretations of more complex forms like the Flower of Life, or Metatron’s Cube, some of the geometric forms I find most fascinating are the simplest. This is because the simpler a form is, the more universal it is. In the simplest forms, I see the very foundations of all creation. So, what is the symbolic significance of a few of these simple geometric forms?

What follows are not in any sense “official” masonic interpretations of these forms, but merely one mason’s reflections on them. Books can and have been written to interpret these and other geometric forms, so here we will just be sampling a few.

The point is the beginning of all forms, and all finite things. In that sense, it is the most abstract representation of finity, of a finite form. It does not even have definitions, specific boundaries, size, or dimensions, and therefore is the most abstract finite thing that can emerge from the formless infinity. It is also the beginning of duality, because in the point, you have one thing which is separated from everything else, the thing and its surrounding context, self and world. Yet, without a clear boundary, it still contains an element of infinity within it. The point can be viewed as infinitely small, or infinitely large. Without boundaries and other objects to be compared to, it has no reference.

In the point, we can see the fundamental essence of all finite entities, including each person: the Self, consciousness, existence.

The line is the first movement of the point, the first dimension of form. As such, it represents the most basic possible expression of time and motion. In the line, we can see the progression from moment to moment of what was first seen in the point. While the point is motionless and still, the line implies a trajectory, and a continuity. It is also the first impression of a space in which motion and change can take place. Yet, the line is only the simplest, most primal of forms with a boundary, and does not yet demonstrate a space in which objects may exist, although it begins to imply them.

In the line, we can see the fundamental essence of all motion and change, linearity, past progressing into future, and memory.

The cross is where two lines meet at a perfect right angle, and the simplest indication of the second dimension. In the cross, we can see the implied 2-dimensional plane stretching out in four directions. Also within the cross, we can see both the singular point, and the line doubled. Like every new form, it is the expansion of what came before it. The cross is where two intersect to become one; two planes, two people, two forces, and the point at which they meet is also their origin.

In the cross, we can see the fundamental essence of all duality, multiplicity, and complexity. It is the simplest possible mandala, and also represents the multiple dimensions of self, whether masculine/feminine, thinking/feeling, or ordered/chaotic, intersecting at the central point of consciousness or spirit.

The circle is the perfect return of the trajectory of the point traveling in a line back to its origin. Simultaneously, it is an enlarged and expanded representation of the point, being equidistant in all directions from the center point. In the circle, the completeness and perfection of the process of the formless point expanding into form can be seen. Within the circle, we can fit any number of mandalic or sacred forms, such as the pantagram, the hexagram, the cross, or the equilateral triangle. It contains all of these in essence, and yet is beyond all of them.

In the circle, we can see the totality of form, the Ouroboros, the nearest form to infinity.

The circumpunct is the completion of the journey from finite point to infinite circle. In the circumpunct, all of the dimensions of self which have progressed outward into form are in complete and total balance and alignment with their formless origin. In the mind, it is the personality in complete harmony with its essence and origin. It also represents the essential boundary of the self. While the point had a finite existence, it still had a certain infinite quality, in it’s lack of defined boundaries. In the circumpunct, we have both the boundary-less point of origin, and the boundary, with self on the inside, and world on the outside.

In the circumpunct, we can see the completion of all existence, the simultaneity of infinity and finite form, the perfection of self, world, and the relationship between the two. 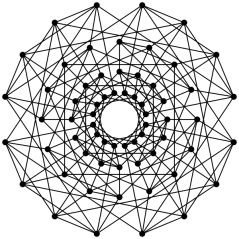 The truth is that neither you nor I have ever really seen a point or a line, only things that are shaped like them, usually drawings on paper. But the truest sense in which a point and a line exist is in the abstract realm of ideas, yet they are clearly significant. We could not build anything without them, and this is true of mathematical abstractions, in general: they are ephemeral, yet essential. But can they be regarded as the true foundations of all creation, of reality itself?

This seems to me to imply that the world in which we find ourselves is in fact a manifestation from the infinite 0 dimension, into the four dimensions where we currently find ourselves. Its almost as if a divine infinite mind, in similar manner to an architect, charted out and traced the fundamental principles of reality by which a creation could manifest.

But is that really where it ends? For us, the 4 dimensions are the extent of dimensionality we can see and understand, with even the 4th being somewhat mysterious to us. But what if this is merely because of our position along the spectrum of dimensions, and in actuality, this process of one dimension implying the next goes on infinitely, with the 4th implying and creating the 5th, the 5th the 6th, ad infinitum?

String theorists and various other kinds of physicists currently posit some number of dimensions, often 11 or higher, but what if there is no ceiling to the dimensional hierarchy extending into the unseen, unknown realms of possibility? In that case, we truly could be said to be dwelling in an infinite creation.

← What is the Role of Gender in Esotericism and Freemasonry?
Is Freemasonry Free from Religious Bias? →

4 Comments on “Freemasonry and Geometry: What are the Symbolic Meanings of the Most Basic Geometric Forms?”