The Mystery: Why Does It Matter?

Posted on 10 Aug 2018 by jonathandinsmore

“Why do you care whether there is a God, or extraterrestrials, reincarnation, or any of that? What relevance does it have to your life?”

This is a question which I have often heard, in one form or another, when bringing up topics related to the mysteries of life, from those who are not typically inclined to ponder them. Personally, I have always found the mysteries irresistible, so this common refrain has always been somewhat baffling to me. How could you really not care whether there is a God, or extra-terrestrial life? Such apathy toward the ultimate questions of life seems unfathomable, to me.

Indeed, those who find themselves involved in Freemasonry are generally those who are inclined to explore these questions, and this is part of what draws us to the craft, esotericism in general, and what is often referred to literally as The Mysteries. This is also why the fellowship of a brotherhood of truth seekers is so precious to those who find it, because our kind so often feel alone in a world full of those who care more about their bank balance, newest electronic gadget, or mundane interpersonal dramas than the quest for ultimate reality.

So, like a fish trying to describe the ocean, for a long time it was difficult for me to articulate why these things matter to me so much when this question arose. However, I eventually did manage to create some semblance of an explanation, which I would like to share with you now. Perhaps by reading this, you will have a new answer in your repertoire the next time someone asks why you seek truth.

The short version is: I care about the mystery because the mystery is the ultimate context of my existence, and context is absolutely everything; the context of a thing defines that thing and gives it meaning. Allow me to explicate.

The human condition is defined by a finite or limited conscious existence, and a mystery beyond it. In fact, I believe that this is probably the condition of not just humans, but any entity, since any finite consciousness is always limited, by definition. If it had no limits, it would not be an “entity,” it would be infinite.

In other words, there are things you directly experience, and there are things beyond that, with a gradient boundary between them. Regardless of how far your awareness may expand, there is, a priori, always a boundary to it and always something beyond that boundary, which to you is a mystery.

The only possible exception to this would be if our awareness became infinite, perhaps, but we cannot really imagine that. Barring the hypothetical exception of infinity, there is always a boundary to conscious existence, and therefore, a mystery beyond it.

This would presumably also be true for any self-aware finite entity, from the lowliest worm to the most vast super-intelligent species, or even advanced spiritual beings. If they are not infinite, then it seems to me that their existence must have this structure: the known, the unknown, and the boundary between.

The Existential Island in an Ocean of Mind 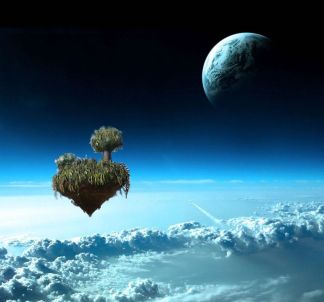 One helpful metaphor is to think of our existence as a sphere, like a planet. That planet has its basic substance or ground, which for us is our direct sensory awareness. These are the things we are most certain of, because we directly experience them, and in this metaphor, they are our ground or earth, which also relates to our colloquial sayings about being “grounded” in reality. This is the reality to which we refer, our most certain, sensory reality, the bedrock of our experience.

Then, there is another layer which is beyond the ground of sensory experience, but which is near enough to be relatively certain; you can liken this to the atmosphere of our metaphorical “planet” of existence. For us, these would be facts outside of our senses, but nevertheless trustworthy, thanks to evidence and logic (to put it briefly).

For instance, I can be relatively certain that oxygen exists, a faraway country like Russia is really there, and that I have a liver, even though I’ve never truly seen or experienced any of those things. Thus, there are things I have not directly experienced, yet of which I am relatively certain. Here is where the boundary begins.

Finally, beyond that of which we are relatively certain, there is the larger Mystery, about which we ponder, and upon which we weave the fabric of our beliefs, by combining reason with imagination. To continue our planet metaphor, this would be the vast starry expanse in which our planet is suspended. Just as the cosmos is the context of a planet, whatever is beyond the boundaries of the ground and atmosphere of our existence forms the context of it.

Thus, the mystery is the context of our existence, and is experienced purely in the realm of imagination, hopefully tempered by reason. Regardless of what is actually “out there” beyond what we know with varying degrees of certainty, our experiential existence floats in a cosmos of mind and imagination because we can only imagine and reason about what is beyond the boundary of our experience and certainty.

Not only that, but no matter how far we expand our knowledge and experience, it always will float in an ocean of imagination and mystery, because that seems to be the inherent structure of any finite, experiential entity. How else could it be?

So, “Fine,” you might say, “the mystery is the context; why should the context matter to me?” My answer to this is that the meaning of anything essentially is derived from its context. Let’s take a very concrete example: a bar fight.

Let’s say that you witness a fight break out between two men in a bar. If you know absolutely nothing about the context of this fight, it will mean very little to you; perhaps you may have some thoughts about the volatility of alcohol and testosterone when combined in too great a quantity. In other words, to you, it is a relatively meaningless occurrence.

Let’s say that you now expand your knowledge, when someone tells you that the reason they fought is that one man was sleeping with the other’s wife. Now, to you, this is a very different bar fight, is it not? Yet, it is the same bar fight; it is the context of it in your own mind and imagination that has changed. Let’s say that you hear from yet another person that the reason the affair occurred in the first place is that the husband was abusing her; yet again, another vastly different bar fight.

Let’s say, hypothetically, that your spiritual “third eye” suddenly opened, and you were able to see that this was an unfolding of karmic patterns through time that had been in motion for thousands of years between these two souls, as they weave a pattern of flesh-bound experiences in and out of various bodies and lifetimes, trying to find a balance and transcend the illusory nature of this physical reality, for their ultimate mutual enlightenment. Yet again, a totally new bar fight, with a totally different meaning.

Why? Because with every expansion of your knowledge of the context of the fight, your experience of the fight transforms. The same is true of your entire experiential existence, the same principle is in operation every time you learn, and explore the mysteries.

That, my friends, is my answer to the question of why the mystery matters. To me, this is like something I had always subtly known but for the longest time had difficulty articulating. Perhaps it may strike you the same way, as almost obvious, yet novel in it’s explanation; or, perhaps you somehow disagree, in which case I would love to hear your perspective.

Either way, I hope that you have enjoyed it. Thanks for reading!

← The Sacred Tetractys: Why do Freemasons connect the dots?
Eastern Sages, Western Secrets: What Has Vedanta to Do with Freemasonry? →

5 Comments on “The Mystery: Why Does It Matter?”