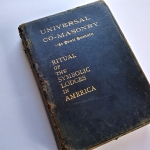 The Order for decades called “The Honorable Order of American Co-Masonry” now is “The Honorable Order of Universal Co-Masonry.” The decision follows a vote by the Order’s Grand Consistory and Lodges, with 95 percent of the Lodges and 100 percent of the Consistory approving the proposition. The vote was ratified by a unanimous vote of the Supreme Council on April 25th, 2017.

“Universal has a geographical implication of being all over the globe, but also that we allow membership of all races, creeds, religions, sexual orientations, etc.,” Matias Cumsille, President of the Order’s Corporate wing, the American Federation of Human Rights, said in an email.

The corporate name remains the same.

The word “Universal” was part of the Order’s original name during its beginnings in North America, where the first Co-Masonic Lodge on the continent was founded in 1903. The word “Universal” first appears in Co-Masonic history with the founding of “The Order of Universal Co-Freemasonry in Great Britian and the British Dependencies” by Annie Besant in 1902.

That Order operated under the umbrella the French-based “Maçonnerie Mixte”, today know as The International Order of Freemasonry for Men and Women, Le Droit Humain. The North American Order then was Le Droit Humain’s American Federation.

“Universal” likewise became part of the North American Federation’s name and seems to have intermittently continued into the 1940s. An investigation into why the word “Universal” ultimately was replaced turned up no certain answers. North American Co-Masonry remained part of Le Droit Humain until a separation during a protracted and often contentious legal proceeding in the 1990s.

The Order in North America has since operated as an independent Masonic body, “The Honorable Order of American Co-Masonry,” operating out of its long-time headquarters in Larkspur, Colorado. Le Droit Humain, for its part, established a new American Federation chartered in Delaware.

Over the past decade, American Co-Masonry expanded outside its traditional North American boundaries and today includes Lodges in South America. That expansion made the time right to assume a visibly international identity and resume use of the word “Universal” in place of “American,” Cumsille said.

Photo: Cover of one of the first ritual books used in American Co-Masonry, including the original use of “Universal” as part of the Order’s original name.